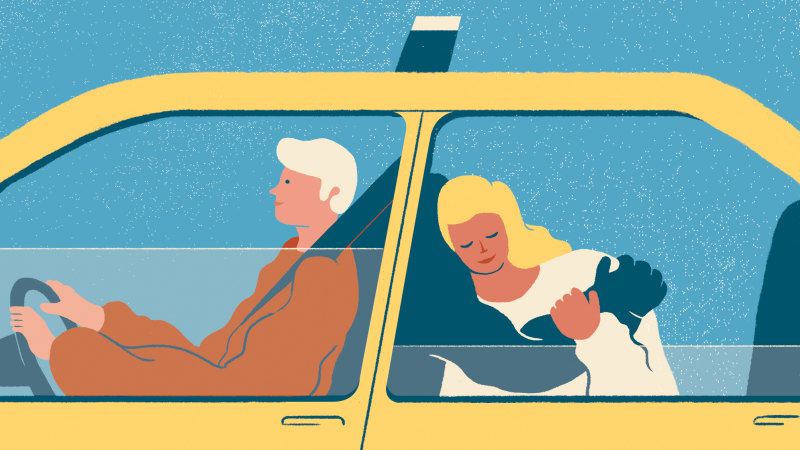 “He might be an old drunk who needs our help,” my father replied dispassionately. The old man thanked him and waved him away. My father restarted the car, comfortable that duty was done, and we resumed our way home. Sympathy always kicks in with strangers: empathy might or might not.

There was a time I was profoundly grateful that a stranger was sympathetic and not empathetic. Diagnosed with breast cancer, I had just climbed a hill to hail a taxi to Sydney’s St Vincent’s Hospital. I was feeling that blankness we summon when we’re coiled up tight but don’t want to think about it, let alone show it. I was also sad that I was facing it alone.

He read the last rites over me. If I ended up dying and a priest came bothering me, he said, I could send the man packing, saying, “Sure, Sean’s done it already.”

The taxi driver was an elderly man called Sean, who had a powerful lilting Irish accent to match. He was also a chatterbox. When he said it was a bit early to be visiting someone in hospital, I blurted out the reason I was going there. When we got close, we caught a glimpse of the hospital’s storeys-high Catholic cross. “Don’t worry, the nuns will look after yer,” Sean said.

When I told him I was an atheist but that I was sure they would, he began to declaim in Latin. He had, he told me when he finished, just read the last rites over me. If I ended up dying and a priest came bothering me, he said, I could send the man packing, saying, “Sure, Sean’s done it already.”

We giggled together. He told me about going to a Catholic school in Ireland, where the head nun used to say to him, “Sean, Sean, yer faith is tepid.”

My muscles unwound. I couldn’t stop laughing. Sean was funny and kind. And he was sympathetic in the sense that his fellow Celt, Adam Smith, used the word: he cared but kept his emotional distance.

An empath who “felt my pain” would have been of no use to me that day. Sean broke down my tension with his sense of fun, and I believe he knew exactly what he was doing. I was still laughing as I walked in to the hospital to register my arrival. The man who took my details said he’d never seen anyone come in for cancer surgery with a smile on their lips.

The transience of my exchange with Sean was important. I remember what he looked like. I recall the timbre of his voice. Above all, I remember the sympathy that passed between us, an intensity of understanding and intimacy. But it was unfreighted. There was no experience of acquaintance looking backwards or any expectation going forward.

The encounter remains a bright moment in my memory, preserved in detail, never to be sullied; a brief yet expansive conversation with a sympathetic stranger, no drama. And who remained a stranger, never to be seen again.

To read more from Good Weekend magazine, visit our page at The Sydney Morning Herald, The Age and Brisbane Times.