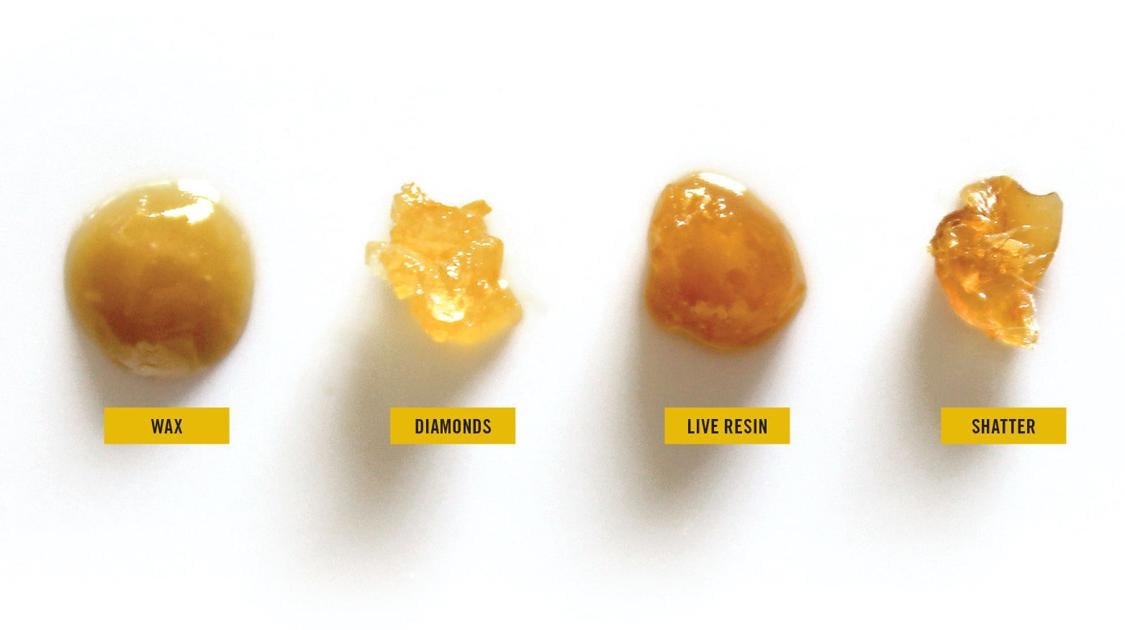 As cannabis becomes widely available, Oklahomans have more ways than ever to partake. An increasingly common method is in the form of a concentrate. But what are concentrates? How strong are they? And how does a dab rig even work?

Although most forms are recent developments, some concentrates have been with us for centuries. Hashish is one of the oldest; it was first mentioned in writing in the 10th century. It is made by compressing trichomes (those little hairs on your buds) into a patty that can then be smoked, vaporized, or decarboxylated — heated to a temperature that allows the body to metabolize THC — and eaten. It was used as an edible in the Middle East and India for hundreds of years. Charas, a form of hashish made in India, is used in worship by certain Hindu sects. When tobacco was introduced to the region in the 1500s, hashish smoking also became popular.

Tulsan Robin Nordby owns Medicine 4 the Masses cannabis processing lab with his wife Amanda Nordby. He first started making concentrates in 2017, when his mother was diagnosed with pancreatic cancer. The family moved to California, where medical cannabis was already legal.

In California, Nordby began to make RSO for his mother. RSO, or Rick Simpson Oil, is made by freezing the cannabis plant below zero and using ethanol to extract the THC, terpenes and other cannabinoids. The ethanol is then reclaimed, leaving a dark, high-potency oil.

Although his mother ultimately lost her battle with cancer, Nordby believes RSO made a huge difference in her final months.

“I would say that the cannabis greatly improved her end-of-life quality and quality of condition and state of mind,” says Nordby, who makes concentrates through Medicine 4 the Masses, hoping to bring that same comfort to others through products distributed at local dispensaries.

A typical way to consume concentrate is with a special pipe called a dab rig. Similar to a

traditional bong, a dab rig has a specialized bowl called a nail. The nail is heated with a blowtorch, and a small amount of concentrate is vaporized while the smoker takes their hit. A full dab rig can be intimidating to the uninitiated, and other options also exist. Many edibles are made with concentrates, and disposable vape cartridges also are available.

Concentrates are much stronger than cannabis flower, ranging from 40% THC and up. Medicine 4 the Masses just completed one, dubbed “Cyber Sunset,” that clocks in at 70.6% THC and 10% terpenes. By comparison, the nine most popular flower strains on leafly.com range from 17.5% THC to 21.5% THC. The difference in THC content means a much smaller amount of concentrates is smoked at a time than flower — literally a “dab” about the size of a grain of rice. The higher potency of a dab means it’s easy for an unexperienced user to take too much too fast. Although there have been no reported fatal overdoses of cannabis, according to the National Institute on Drug Abuse, getting too high can be an uncomfortable and confusing experience, so exercise caution with new products.

Concentrates offer a number of benefits to cannabis patients. “I personally do enjoy both (flower and concentrate),” says Nordby who uses cannabis for social anxiety, stress relief and to help sleep. “But concentrates — I like the fact that we’re vaporizing and not combusting.” He also says he enjoys the convenience of dabbing, and a more potent product is more appealing to seasoned cannabis users.