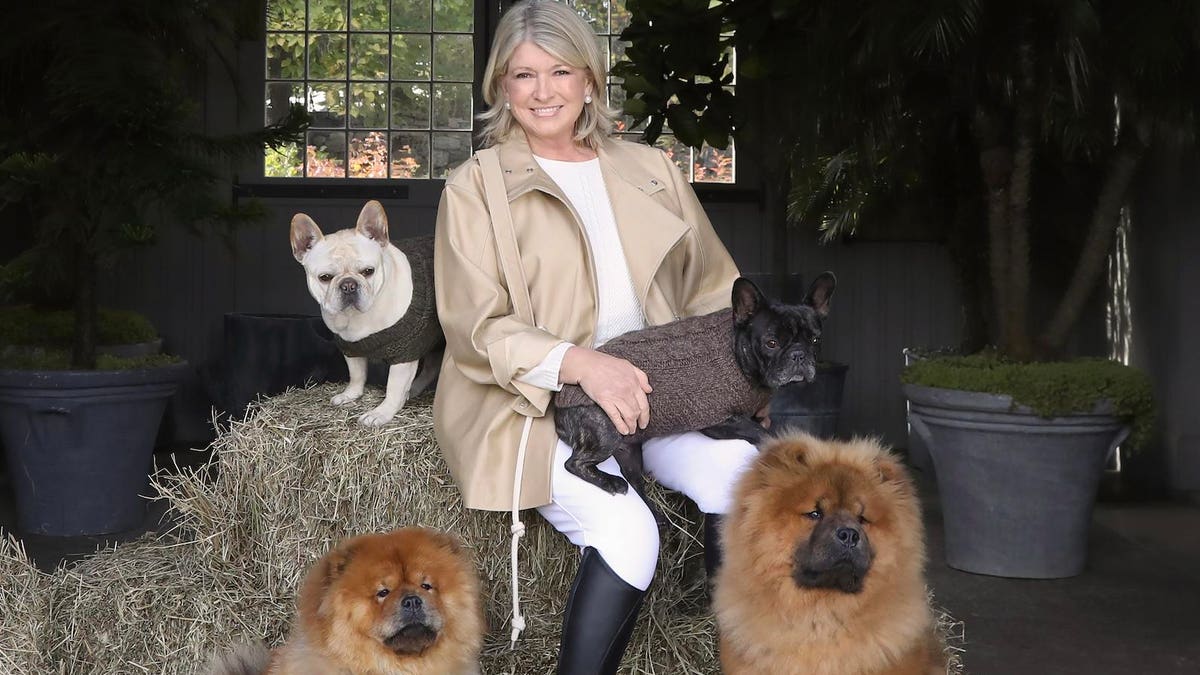 If you didn’t know any better, you might think Martha Stewart lives at a zoo—or at the very least, an animal sanctuary. Her sprawling Connecticut farm is home to hundreds of chicken and geese, 20 peacocks, lots of pigeons, horses, donkeys, and cats, but it’s the four dogs inside her house who really run the show. Long known for her love of dogs, the lifestyle guru’s current clan includes two Chow Chows, Emperor Han and Empress Qi, and two French Bulldogs, Bête Noire and Crème Brûlée. However, it was one of her former dogs whom she had in mind when creating her latest product, a line of CBD dog treats.

“I had a rescue Chow named Empress Wu, who was a problem from day one,” Stewart recalls. “She was slightly blind and had probably been abused, and she was really a scaredy dog.” After Empress Wu bit somebody’s leg under a table, Stewart grew worried about having her grandchildren in such an environment and made the tough decision to send the dog to her breeder, where she’d spend the rest of her days. “It was very sad for me that there was nothing we could do for her, and I think about her a lot,” the businesswoman says. “And I think she would have reacted very nicely to these chews.”

Stewart has been an unexpected player in the CBD space for some years, thanks in part to her good friend Snoop Dogg. “I’m always looking forward and always looking at the new and the different,” she explains. “When I started to hear about CBD and its effects on humans and I started to try different products, I was quite surprised to find that they were indeed effective for certain things.” After joining the board Canopy Growth in 2019 and launching a line of CBD gummies (or as she calls them, pâte de fruits) with the company last year, she realized that CBD’s benefits could also extend to pets. “It occurred to me that dogs, too, like good taste and that dogs, too, like to be soothed and calmed and made to feel better,” she says. “Some dogs are anxious, some dogs ache from arthritic conditions or previous wounds, some dogs have anxiety when it comes to getting along with other dogs, and all dogs just want to feel good.”

Stewart began working with Canopy’s scientists and in-house veterinarian, Dr. Bob Menardi, and developed a line of CBD dog chews that marries her exquisite taste with expert research on cannabis. The treats are available in three variations—Wellness, Mobility, and Calm—with a different Martha Stewart recipe in each. “Taste is so important to me,” she says. “Even for the dogs, I chose flavors like chicken, blueberry, cranberry, which are all good and nutritious.”

Stewart’s CBD dog chews come in two sizes, specifically formulated for large and small pups, which she believes will help customers feel confident in the product. “We worked closely with Dr. Menardi and a team of researchers to come up with the right dosages,” she notes. “And that really contributes to our well-being to know that we’re giving the right stuff to our dogs.” Each bag contains 30 treats and costs between $19.99 and $24.99, depending on the type, and the whole line is available for purchase starting today.

Following the debut of her new dog chews, Stewart hopes to expand the CBD for Pet line to include products for other animals so that everyone on her farm can feel as great as her Frenchies and Chow Chows now do. “Right now, we’re talking about developing of course for cats and of course for horses,” she says. “But I don’t think my chickens require any CBD at the current time—unless there are some hawks overhead!”