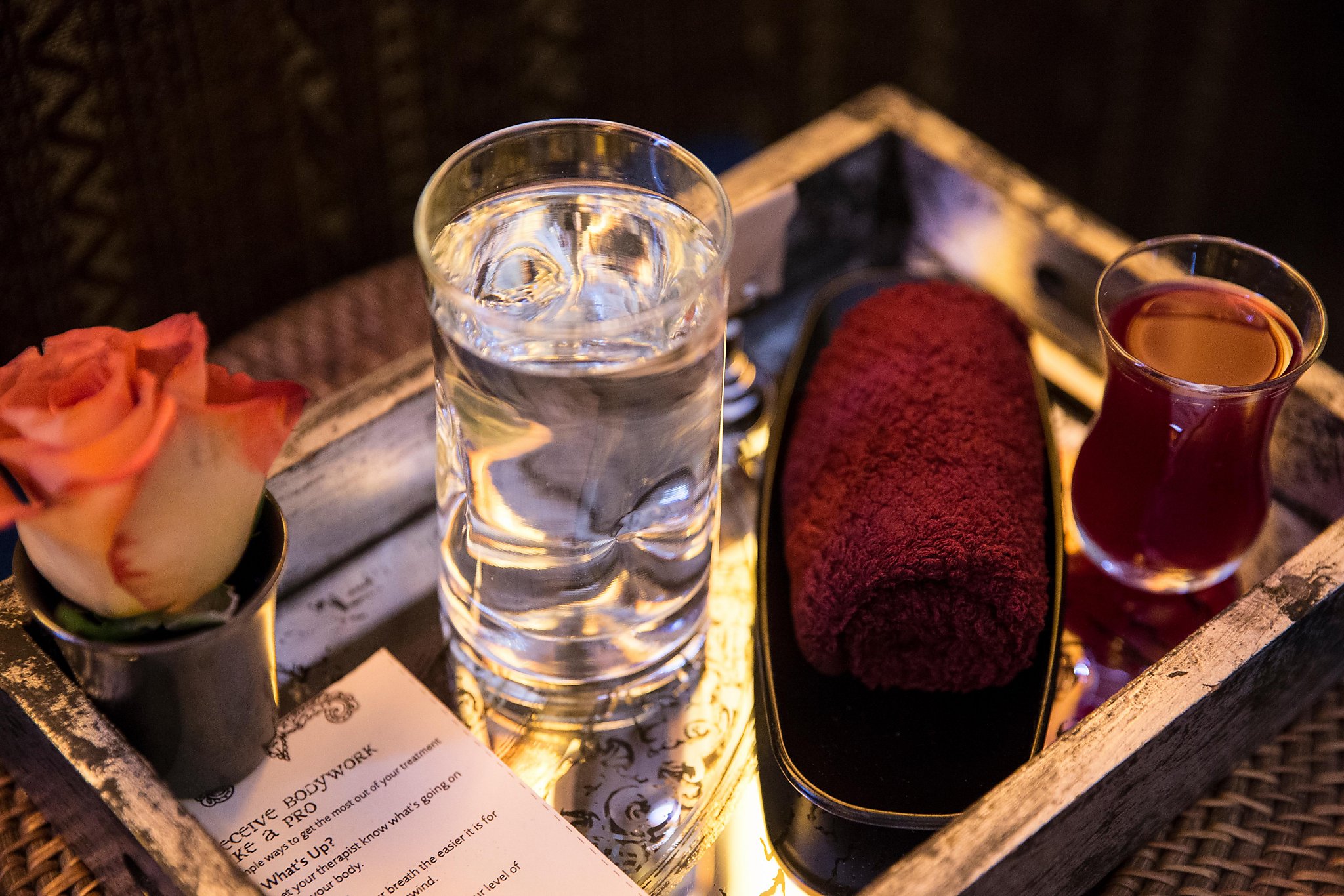 It takes a second for your eyes to adjust when you enter Earthbody, a day spa in Hayes Valley. Once you’ve settled on the dimly lit pillowed banquette, a spa employee brings you paperwork along with a tray of goodies to begin your cannabis ritual.

No, the tray isn’t stocked with an indica joint, a lighter and a THC-laced edible. Rather, it proffers an in-house elixir of hibiscus, rose, lemon and mint, a lemongrass-infused hot towel, and a proverb for you to enjoy later.

Despite January’s legalization of recreational marijuana, the word “cannabis” — even when attached to a luxurious spa treatment — sometimes invokes potheads and munchies. But the cannabis in Earthbody’s ritual comes in the form of a hemp-derived oil containing cannabidiol (CBD), one of over 100 cannabinoids found in the cannabis plant. A non-psychoactive compound (read: it won’t get you high), CBD is touted in numerous medical studies for its multitude of benefits from easing muscle pain and anxiety to cutting inflammation in the body. CBD and tetrahydracannabinol (THC) are the most prevalent cannabinoids found in cannabis, but while CBD might make a user feel relaxed, its wild-child cousin THC gives users a euphoric effect (read: it will get you high).

A perceived stigma hasn’t stopped some of San Francisco’s top spas, including Earthbody, the Remède Spa at the St. Regis hotel, and Kabuki Springs & Spa from integrating CBD-infused treatments into their menus. Randy Pierce, spa director at the Remède Spa, said its CBD oil massage add-on is extremely popular.

“Our local clientele love it,” Pierce said. “They come frequently for muscle relief and general anxiety.” The majority of those ordering the CBD add-on are acquainted with the compound and its so-called benefits before ordering it, she said, and that those clients not in the know tend to be more wary. “The clients not familiar with CBD, or who aren’t as spa savvy, tend to be very reluctant to try something they associate with marijuana.”

Andrea Kennedy, a local Remède Spa client, hadn’t heard of CBD but was thrilled to be introduced to it. “One of my friends told me it really helped with her muscle recovery, so I thought I would try it. Seriously, it was 90 minutes of heaven. I had a hard workout that morning and I wasn’t even the slightest bit sore after the massage.”

Gail Fuller moved to San Francisco in 2016 and had never heard of massages with cannabis oil until she booked a massage at Earthbody.

“I was looking to relieve the pain from my parathyroid tumor,” Fuller said by email. “I shared my symptoms and my massage therapist recommended I try a massage with cannabis oil.”

So was the CBD effective in treating Fuller’s pain? “I was surprised that I found some relief. I quickly booked two more massages, including one the day before my surgery.”

Earthbody Founder & CEO Denmo Abrahim formulates the CBD oils used in Earthbody’s cannabis rituals under the umbrella of Omcali Sacred, her line of botanical-based skincare. “I personally have used CBD for some time for my own self-care,” Abrahim said.

“I found that a lot of the topicals on the market were disappointing; they weren’t as nuanced. It was mostly cannabis companies, not skincare companies — they weren’t using high-grade oils, they were mainly incorporating high dosages of CBD in a base solvent.”

Abrahim’s Omcali Sacred makes two types of CBD massage oil — Soothe and Calm — that are comprised of organic oils like grapeseed and used in Earthbody’s cannabis rituals as well as sold in the spa and online.

Is this just a trend around the recent legalization, or will CBD massages be the new spa-menu staple? Kabuki Springs added a CBD massage in December 2017 and it’s been incredibly popular, representatives said. Angelina Umansky, co-founder of Spa Radiance, says she is looking at integrating the full spectrum of CBD products.

“We are currently in talks with a few beautiful CBD-based lines,” Umansky said. “Ideally, I would love to both have CBD-based services but also provide an ingestible in the boutique, to help clients with stress and general inflammation.”

International Orange owner and co-founder Melissa Ferst said via email she would consider bringing in CBD services and products when the time is right. “We are very discerning with any product line that we bring in, so it can be a process for us. But it is on the list for further research as things in the cannabis world evolve.”